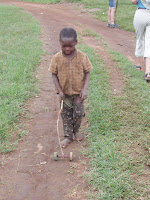 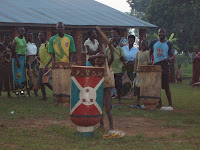 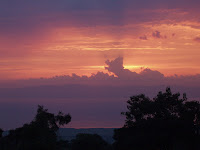 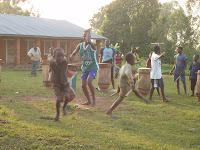 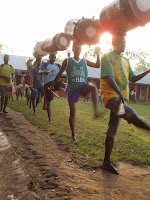 The time has flown. Quiet weekend only three admissions to the malnutrition ward, all with malaria, anemia,malnutrition...it is a vicious cycle. They are malnourished they get malaria which makes them anemic, which prohibits them from absorbing any nutrients. We attack the malaria and also try to build them up multivitamins, iron, and special formulated milk. But the good news is, is that they come in very sick, sad, listless, miserable, crying,withdrawn and (so far)go out of here soooo much better, acting like kids should, playing, laughing, and interacting,...and of course still some crying but not nearly as much.
I smell like F-75, and F-100 (the malnutrition milk formula), multivitamins, liquid iron, quinine and amoxicillin suspension, all mixed together, to say nothing of pee...or at least I think I do because that is what I have been smelling and dealing with all day. It takes getting used to.
Today the two older boys who have been here for a while and will continue to be here for a while more, one with a significant leg wound on his thigh, and the other with peritoneal TB,went to the local school for the morning. They seemed to enjoy it and when Helen and I went to fetch them at noon, we were quite the distraction. It is good to get them out of the hospital setting
to have the opportunity to continue with school.
We went to watch the drumming on Saturday. Two of the VHW employees, Peter and Mandela, along with several other local boys have formed a drumming group. They are amazing. You can watch a video of them on the VHW website. http://www.villagehealthworks.org/ They practice Tues, Thurs, and Sat evenings, and it is a teaching session for several of the younger boys, some of whom are not even as tall as the drums.There is also a girls singing and dancing group that I watched practice on Friday.
We spent last weekend emptying a storage area of medical supplies and sorted through them all, finding lots of very useful stuff...I was able to put together two complete OB delivery kits...much needed, and then tons of not so useful stuff, like 3 ancient IV pumps for which there is no tubing to fit them, a whole box of dental impression plates(?), all kinds of specialized lines for monitoring patients but no monitors, a whole total hip surgical kit (which can and probably will be cannibalized)...doing surgery here is not possible, and probably won't be for several years. It is odd to see some of the things that have been sent here, certainly from people with good intentions but with no clue as to how useful they might actually be. ..or not.
Only two weeks to go.... it will be hard to leave.
Posted by conniestravels at 6:35 AM No comments: